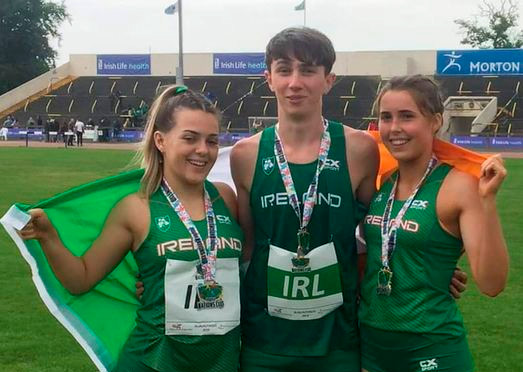 As though last night’s breaking news re Seren O’Toole wasn’t great enough, additional info received this morning is that two additional juvenile athletes have also been named on the Irish relay squads for those major international championships in 2021.

Eimear Rowe was a national champion in 2019 for both 400m and Relay – and medalled over 200m also. This outstanding form made her an obvious selection candidate and we are delighted for her, her family and the coaches involved. Like Seren, she has already represented Ireland internationally.

Robert McDonnell has been making waves internationally for quite some time; his selection for both 4×100 and 4x400m was not a surprise! Robert took the National 400m title this year following multiple titles, records & accolades for 2019.He has also brought his 100m time down significantly to count himself among the country’s leading sprinters – as well as being among the nation’s most promising 1 lap athletes.

The coaches who helped make this happen deserve applause also – notably PJ Coyle, Brendan Glynn and Dave Shaughnessy – among many juvenile coaches past and present.

After we pause to take a deep breath from this ultra-exciting news we will add further details; for now, we acclaim & celebrate this history-making trio in creating one of our club’s best ever moments.