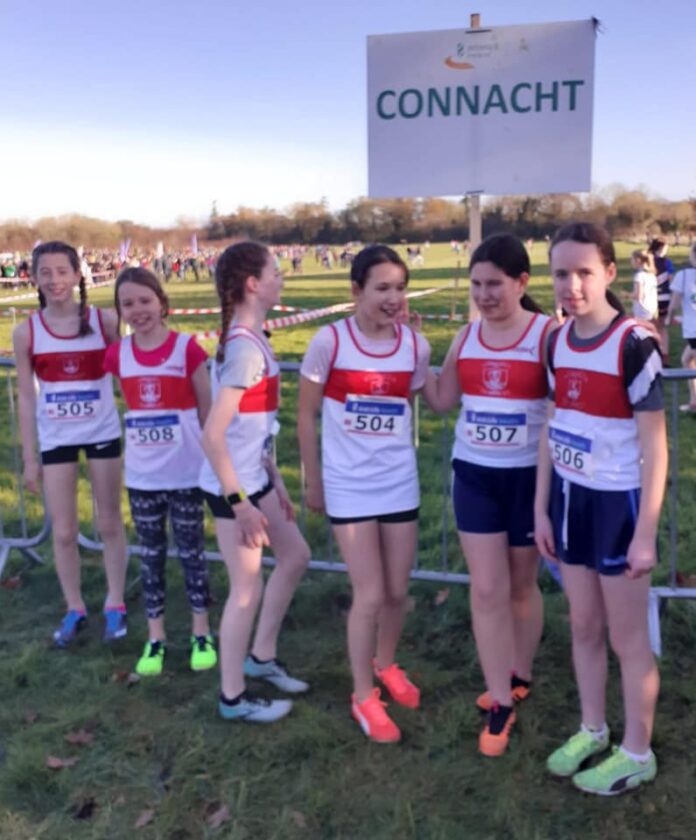 GCH travelled to sunny Gowran, Kilkenny with a large contingent for the National Uneven Ages Cross Country Championships.
Our Under 11s kicked off the day: these 3 representatives made it to the Nationals at the first time of asking, which is a great achievement. Emily Maloney placed 177th following a great season. Both Keelan Keady & Finn Lynagh were only just outside the Top 100 in the boys race.

Our u13 Boys were represented by Justin McCarthy who was just inside the top 100 in 95th.

Justin’s sister Jennifer was part of a strong GCH u13 Girls team that competed really well, spearheaded by Keilah Murray in 82nd and Caoimhe Lydon in 99nd. Jennifer, Laura Campion, Rachel Francis & Jessica Burke completed the squad that finished in 18th position. Keilah Murray was also part of the Galway team that came a creditable 7th in the Inter County competition.

The Under 15 Boys also had a team, led by Harry Keaney (85th), Odhran O’Driscoll (89th) inside the top 100 and followed closely by Dara Comer Byrne & Eamon Lydon. The Boys Team finished 15th in Ireland overall, a great achievement.

In other juvenile races, Caitlin Podmore and Sophie Foley were not far from too 100 in 120th & 130th respectively while last but not least at all, Isabella Burke had our highest finish if the day in the under 17 race when placing 29th.

Superb running all round, thanks to all parents & coaches for the driving, cheering, coaching and support. It brings a great 2021 cross country season to a close. well done to all our athletes who competed.
Finishing positions today in summary:

Congrats to all who ran so well and did their club proud.

Registration for 2022 now open for new and returning members!

December 17, 2021
GCH Membership is now open for 2022. We would love to welcome back all our members who have registered with us over the past...

December 17, 2021
Eight awards were won by GCH at the inaugural Connacht Athletics Awards - great report below by Connacht P.R O. Pierce O'Callaghan, who made...

November 5, 2021
New Block of Strength & Conditioning Sessions with David Fitzpatrick - Monday the 8th of November at 6:30pm. The block is 6 weeks long and...

October 3, 2021
Great to see all the runners out racing on the Prom today (October 2) in Run Galway Bay. Well done to everyone who took...