Matt Lockett is the Endurance Coach for GCH and NUIG Athletics Club. Matt is also the Athletics Ireland’s National Endurance Coordinator since August 2018.

Originally from the North-West of England, Matt studied for a PhD in Chemical Engineering followed by teacher training at the University of Birmingham and enjoyed a number of years under the guidance of UK Marathon and Cross Country Coach, Bud Baldaro. Matt was instrumental in the resurgence of Birmingham University’s athletics squad and was integrally involved as team manager with Tipton Harriers, one of the UKs most successful endurance clubs. He began coaching on summer residential athletics camps and training his school team. Matt relocated to Galway in 2008. He joined Galway City Harriers and immediately made an impact in a coaching capacity, while teaching in Coláiste Éinde, where he coached athletes to numerous regional medals and the Cross Country team to their first All-Ireland medals. Since then he has coached numerous athletes, u16 through to Masters, to national medals and international representation. In recent years Matt has increasingly focused on coaching GCH U20 and NUI Galway endurance athletes, guiding the GCH athletes to the U20 and U16 all-Ireland Cross Country team titles in 2017 and NUIG to Intervarsity Cross Country and Road Relay medal. Matt has been involved with leading Irish teams at Senior at International Cross country, u18, u20, u23 track and Road running championships. Matt's group sessions cater for u20 and senior male and female athletes targeting track races form 800m upwards, cross country and competitive road races. Whilst most of the younger male athletes in the group would run well inside 17 min for 5km Matt would welcome any male athlete looking to run sub 20min or faster for 5km and willing to help the leading women with their workout. The group have mainly being doing workouts on Tuesday and Friday and a long run on Sunday but that may vary to suit the program. If anyone is interested in joining the group email Matt at mattlockett@athleticsireland.ie 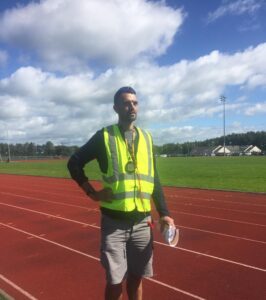