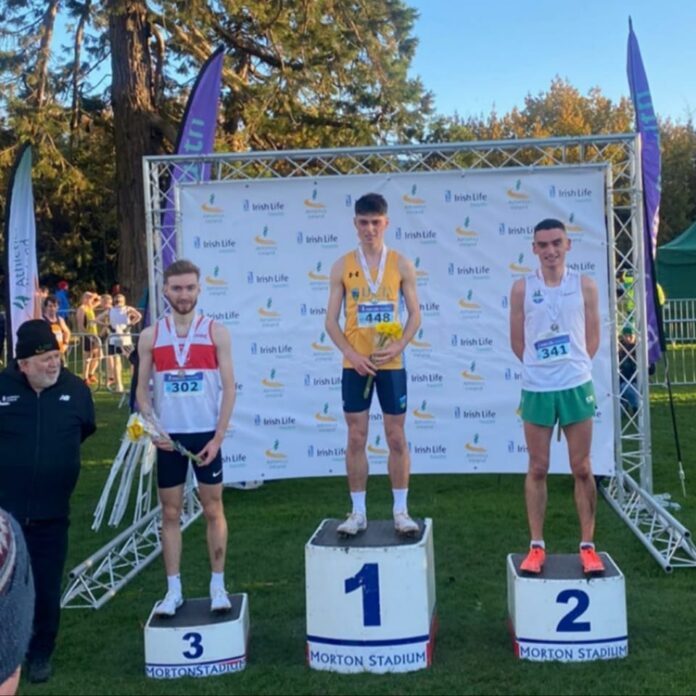 Glorious conditions at Santry for today’s National Cross Country where the cream of Irish distance-running gathered. GCH enjoyed a Top Ten finish courtesy of Thomas McStay, a momentous 8th place in the hotly contested Senior Men’s race. And it was enough for a superb bronze at under 23 Level, a performance that had been touted but it takes something great to deliver the goods as Thomas did today.

Team mate Aaron Brennan (62nd) & David Carter were also inside the Top 100 Seniors, while David Bohan & Conor Byrne were not far behind. Aaron was a brilliant 21st in the u23 category.

Aine O’Farrell showed great form in the stacked-with-stars Senior Women’s race to place 86th. At u18 level, Isabella Burke stormed to a brilliant 32nd out of age, so will relish the u17 event in two weeks. She took the time afterwards to get a photo with hero Ciara Mageean! Eoin Killeen performed very well too with a 152nd place in the u18 Boys race.

Thomas McStay gave us more good news when he was annnounced as part of the Irish Under 23 Cross Country team for the forthcoming European Cross Country Championships on December 12th.
Congrats to Thomas and two fellow Connacht athletes Keelan Kilreehill (Moy Valley) and Thomas Devaney (Castlebar) on their selection: for Connacht to have half of the 6-man team is very encouraging for the province.

Another GCH connection at today’s announcement was AI’s National Endurance Co-ordinator, Matt Locket who spoke of the hard work put in by athletes and coaches to reach this milestone and of his confidence in the squads’ ability to compete with Europe’s best.