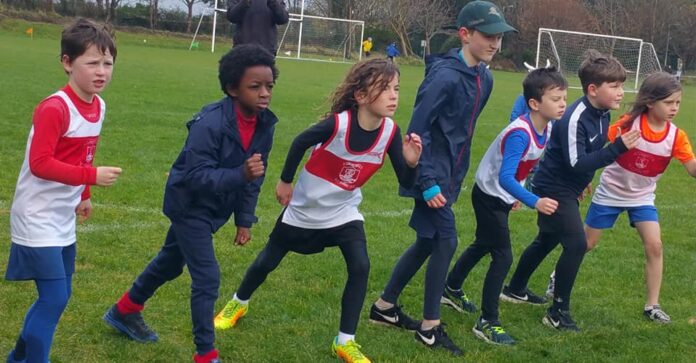 The times & results from yesterday’s races are attached among the photos below…thanks to PJ Coyle for the times, Eamonn O’Donnell for starting all races and to Michelle Van Kampen, Conor Murray and other volunteers for ensuring the data collection and medal giving went so smoothly.

Firstly, these distances are new and arduous for many. Congratulations to each & every competitor who soldiered to the finish line in adverse conditions. Many athletes might have liked to call it a day with a lap (or two) to go, but made the effort to complete the really tough final lap(s).

Secondly, there were just 3 individual medallists yesterday, but cross country involves 6 for a team, so the first 6 from each category count in that regard. All athletes from yesterday should be encouraged that ordinarily they would be part of (or challenging closely to be part of) a GCH team given their performances and completion of the full course.

Definite firsts were achieved by our under 8s Reidin O’Driscoll, Emma Barry & Matisse Vaux who all completed their 500m so well. Well done to these new members on their first competitive races in club colours!

The first 2 went under 2 minutes.

No fewer than the top 5 went under 2 minutes.

Seamus Hayes was an impressive winner of u11 boys with Dara Breathnach and Ciaran O’Driscoll taking the other medals.

Jennifer McCarthy and Keilah Murray were two of the day’s standout runners in the u12 race with Jennifer well under 6 minutes – no mean feat! In the first of a treble medal haul for the Phelan family, Siofra took bronze behind them.

Justin McCarthy was a clear winner in u12 Boys, ahead of Hugo Lynagh and Tom Gill. Soon after, Joseph Lord, Fionn Seoighe, James O’Connor and Sam Jacobson completed their 3 laps.

Caoimhe Phelan led from gun to tape in the u13 girls race, pipping Juno Hayes with Elisa Jaine-Stapleton & Isobelle Doorly only separated by 0.03s of a second being them.

Oisin Maher ran an excellent 5:26 for the boys 1500m with Odhran O’Driscoll and Cathal Heavy both dipping below 6 minutes.

Oisin’s brother Jack is a well-known senior cross country runner in the club and was among the generous volunteers on the day.

Caitlin Podmore, Sophie Foley and Jane Fahy were first 3 home in the Girls under 14 race, with Caitlin below 6 minutes.Sophie O’Haire, Emma Tannion and Abbie Flaherty also finished the 3 laps.

Shane Meagher, Fionn Dahler and Harry Keaney made up the under 14 boys medallists. Ronan Duggan, Dara Comer, Richard McGrath, Eoin Cunningham & Eoin King were next over the finish line.

Keela Loomes, Saoirse Coleman and Eve Kelly took the u15 girls 1-2-3.In the Boys version, Oisin Phelan made it a 2nd gold for the Phelans ahead of Conor Burke and Senan McDonnell.

One of the highlights of the morning was to see Isabella Burke back to her best when winning the under 16 race, just ahead of top middle distance athletes Fauve Aylmer and Aoibhe Joyce. Leanna Nic Donnacha finished the 4 laps well as did Gillian McGrath who was the sole under 17 in the field.

Sean Duggan was the only under 16 Boy present and ran well.

There were 5 under 17 boys involved and William McDonnell, Eoin Killeen and Robert Urquhart secured the medals, with Luke Dahler & Daithi Kilcommins next home.

William’s time of 6:38 for 2km was very impressive.

Overall, the consensus was that it was a great day and a taste of things to come, with a corresponding track & field event already being touted for early Spring!